The elders have played an integral role in human societies since people lived long enough to become grandparents. Their pearls of wisdom were passed on to the younger generation to share their cultural heritage and joie de vivre. Now in this globalized world where the ethnic prejudices rise from the ashes of cultural extinction, symbols are spreading as fast as their meaning blurs, and society is driven by instant gratification; what message are we sending out?

ideologically, it is indirectly based on the musical genre of the same name from the late 1980s in the former Yugoslavia.
This music production was a mixture of classical and modern forms and content. In a wartime environment, musicians of the time sang fame and money using traditional melodies, which they edited using synthesizers. In a similar way of mixing forms in sculptures, I ironize the fact that today’s people are more connected to fleeting experiences than to deeper experiences. Thematically, the cycle focuses on important social agreements in which the boundaries of ethics are in close contact with the boundaries of law. The themes and their constructions directly point to a certain form of the phase of the mind of our society, which by its action forms a parasitic organism. A society of people that constantly creates conflicts and maintains the stressful state of mind of the individual, either as the main potential for economic growth or as a key importance of our existence. The key topics are: eg racism, child abuse as a means to profit, gender, war, power. This moralistic challenge is a crucial contribution to the reflection of today’s consumer-oriented world.

It is important to work with the symbolism of the individual components that create the expression of the final form and describe the content. The statue becomes a free interpretation of the fictional story through a collage of symbols used. However, the author does not use symbols in the normative and “generally” established sense. For example, the word “priest” does not necessarily express legal or religious status, but can be understood as a tool expressing authority. The leitmotif of each sculpture is a direct conflict between two or more moral positions, each position depending on a certain subjective point of view of the viewer.

The formal part of the work is created using a computer and a classic craft approach. The concept is created in a virtual software space, which enables a very dynamic creative work process, regardless of the need for workshop space and the necessary modeling material. Then the model is transferred from the virtual space to reality using CNC machines and then processed by classical technological procedures, such as grinding, painting. The approach to the sculptural figure is directly based on the centuries-old tradition of sculpture, which connects the figure with the pedestal both in terms of technology and content. 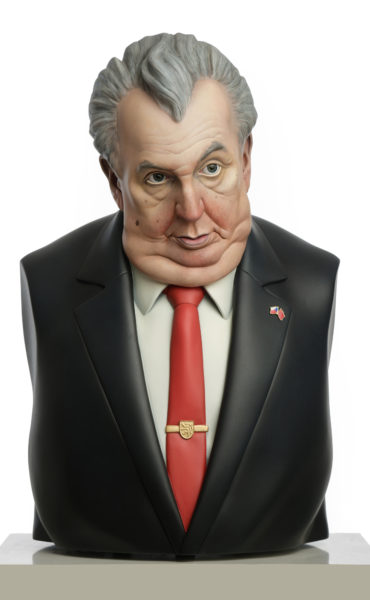